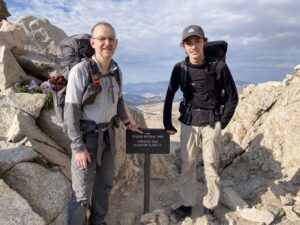 We were up early to climb up to Forester Pass – the highest pass on the JMT (and PCT) at 13’200 feet. The ascent was a brutal set of switchbacks tight into the rock wall, with the trail sometimes blasted into the rock itself. The top of Forester Pass marked the transition from Sequoia to Kings Canyon National Parks. From the top, looking north, was a sea of mountain peaks and high passes – many of which we would need to cross.