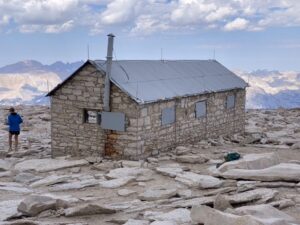 We started early. Passing iconic Guitar Lake we began the long climb up tight switch backs to Trail Crest. The switchbacks pulled us high above the lakes we had passed earlier in the morning. The 1.9 miles from Trail Crest to the summit were long and hard. The trail was mainly talus, with canyons and couloirs dropping off precipitously. Eventually we ascended the final crest and the famous hut came into view. Standing on the summit of Mount Whitney – the start of the JMT.