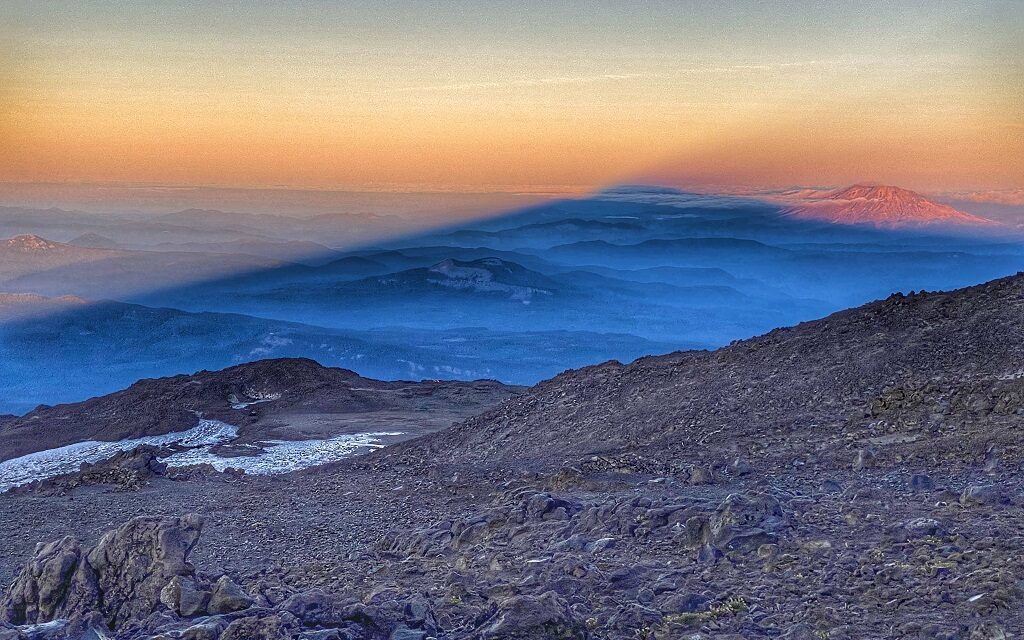 Mt. Adams has been on my bucket list for a while. Looming large in the distance often when I’m hiking around Mount Hood. Labor Day weekend seemed like an ideal opportunity. Mount Adams is technically possible as a day hike, but we decided to take the more traditional 2-day approach with an overnight at Lunch Counter. We aimed to leave on Saturday, be back on Sunday evening and have Monday to recover. Mt. Adams is not a technical climb, but at 12,276 feet, it’s the 2nd highest peak in the state of Washington, and conditions at that altitude can change quickly.

Mt. Adams requires a permit to summit. In 2021 there is no quota. A ranger on the trail told us that in 2022 this would change but that details had not been decided (lottery, first come first serve, etc.,). The current set of permits are available on recreation.gov. At $15 each this was a $45 expense. Interestingly this is the first set of wilderness permits I’ve seen that you can load onto your mobile phone and don’t need to carry a paper copy on trail – although you still needed one for the dash of the car.

As always, a good check of the weather is always advised. Usually, I rely heavily on weather.gov, but for specific mountain conditions, I also find Mountain-forecast.com very good. Unfortunately, there was quite the disparity between the two of them – with weather.gov predicting smoke and haze and Mountain Forecast predicting clearer but quite windy conditions.

Getting to the trailhead

From Portland, it’s not too bad to get to the trailhead. Along I84 to Bridge of the Gods, across the Columbia River, and then along SR14 and SR141 up to Trout Lake. Even though we already had all the permits, we decided to stop at the ranger station to see if they had any sage advice. The volunteer lady at the station advised us that the route up was straightforward but on the way down be sure not to veer of too far to the southwest or we would die. Comforting words.

From Trout Lake, it’s about 11 miles along Mt Adams Recreational Highway to the trailhead. A couple of miles of this a well-finished, single-lane road. This then changes into a decent gravel road to the Morrison Creek Campground. The last mile or so is a little rougher but certainly possible in a 2-wheel drive car.

There clearly been a lot of fire damage (2012 Cascade Creek Fire) and quite some wind damage as well.

Plenty of parking at the trailhead and some new-looking kybos!

From the trailhead, the profile of Mt. Adams to lunch Counter, then Pikers Peak, and onto the summit is quite clear. As is the fact that this looks more like a scree scramble than a hike. Something akin to South Sister. I’m glad we decided not to bring Hunter on this trip – it just looks like a long, hot slog.

The hike starts relatively flat on what looks like an old logging road. Wide and somewhat sandy. The trail is very exposed because of the lack of forest cover. After about 1 1/2 miles is the intersection with the “Round the Mountain Trail”. Shortly after this intersection, the trail starts to climb a little more. There is a creek crossing. Late in the season, this was dry but you could see a waterfall in the distance.

After the creek crossing the trail steepens again and starts to climb into volcanic scree. The trees thin out and become sparse. Eventually, the trail also becomes less distinct as a single trail but more as various possible routes. A set of large wooden poles serve as trail markers. They are clear up into the distance. As the trail ascends it changes to a darker red, more consistent with volcanic scree.

At the first flattening of the ascent – brunch counter a few patches of snow break the way. It would have been possible to go around these. Although we had brought microspikes and so we decided to don those and cut across the snow. No problems crossing the snow and definitely a quicker route. The microspikes performed well. We saw some folks descending through the snow without spikes and they were definitely slipping their way.

Even though there was not a huge amount of snow, it was enough to create small streams and provide a source of water. We had to be careful that it was not full of silt and the meltwater that was running on top of the snow was much clearer.

Just shy of 4 miles we arrived at Lunch Counter. Plenty of campsites were well protected by windbreaks.

The sky was clear, but the wind was strong. It was starting to look like the Mountain Forecast was going to be correct. We found a protected camp spot for our three tents. Pitching tents was a litter harder than normal. The ground was sandy, not giving a huge amount of solidity to the tent stakes. The wind was also picking up briskly. We got our tents pitched and used several well-placed rocks to ensure some extra support. Mount Adams was not visible, but Pikers Peak was straight in front of us. Lunch Counter spread out over quite a distance. On the other side of the flat area, there were clearly visible other wind-protected sites, and there were several below us.

We studied the trail up to Pikers Peak – again there was no real set way – it looked like some folks would take the left side and avoid the snow while others cut straight up across the snowfields.

Water was not a problem and we easily found a stream to filter from. After dinner, we took in the rather stunning sunset. Views of Mount Hood, Mount St. Helens, were sensational.

The night was very gusty. Despite the wind wall, my tent shook all night. In the morning the wind was still whipping strongly. There were amazing views as Mount Adams cast a shadow on the valley below. However, the clouds were racing over Pikers Peek. Sometimes the summit was obscured in the clouds completely. Whisps of clouds shredded down the backside of the ridges. As we ate breakfast we pondered the situation.

A few hikers seem to be making a run for the summit – some also seemed to be descending. After much deliberation, we decided we’d go no further and descend from here. The winds seemed fierce and the cloud cover seemed to defeat the purpose of summitting.

We retraced our way back down from Lunch Counter. The descent being much quicker than the ascent. Of course, by the time we reached the trailhead, it looked like the summit was cloud-free but still, I’m sure windy.

The hike from the trailhead to the summit of Mount Adams is not dar – the round trip is about 11 1/2 miles. However, the overall vertical gain is 6’600 feet. It’s definitely a slog for a destination rather than an enjoyable hike. 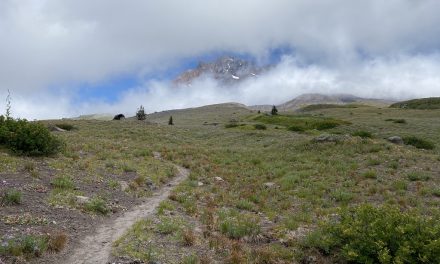 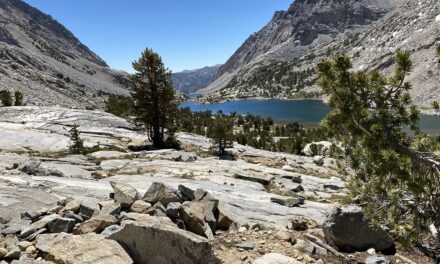 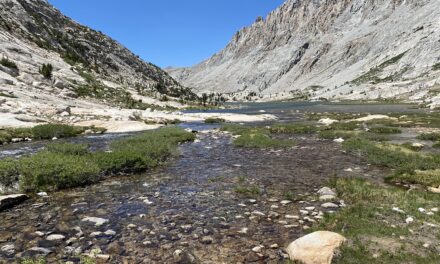 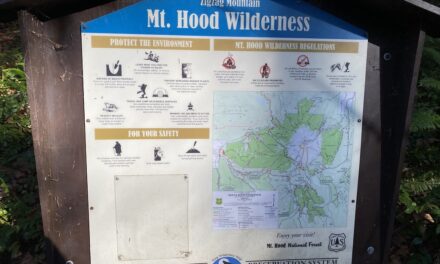